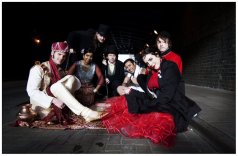 My band, the award-winning Sunday Driver, are looking for aspiring cameramen/women (well – more like anyone with a videophone…) to help us make a video. Here’s the low-down:

Location: Our gig at the Corner House in Cambridge

Brief: Using your phone video camera, we want you to film Sunday Driver playing the gig, and film yourself and the rest of the crowd having a good time. Footage of you getting ready to go out and traveling to the gig would also be useful.

We’ll be using it to edit together for a promotional video to be uploaded onto Youtube and shared with our fanbase across the world! Join us on Facebook and Twitter to discover more about Sunday Driver and what we’re up to this year (it’s very exciting!).

Everyone who submits video on the night will get a free copy of Sunday Driver’s last album “In the City of Dreadful Night” or our new DVD “You Only Steam Twice”. Digital submissions after the show will be rewarded with MP3s.

o    Hold the shot i.e. film something for a while and then move onto the next thing but keep it as steady as possible.

·         Remember to give us your footage after the gig. We’ll be connecting to a laptop via USB so bring any necessary adapter for your phone

·         Make sure your phone is fully charged as filming is battery intensive.

This entry was posted in Music, Steampunk, Sunday Driver. Bookmark the permalink.

This site uses Akismet to reduce spam. Learn how your comment data is processed.