Our next destination was Leeds – city of goths and gorgeous Yorkshire accents.

The gig was in the Howard Assembly rooms – a smaller venue than the previous two nights. We were dogged by problems in our soundcheck, which made us feel very apprehensive about the gig. Toumani and his band also had a few problems with the sound, and ended up borrowing cellist Kath’s DI box.

But then our nerves were forgotten when Stephen and Kath ended up in Toumani’s dressing room jamming with him! It was such a privilege to watch them playing together, and we’re now working on a very special mashup to play at our gig in Manchester on Wednesday. If you look carfeully in the pics below, you may be able to see that Stephen nearly wet his pants with excitement…

Despite the dodgy sound and our nerves, our gig went well – check out the relieved faces!

We snuck in through the Grand Theatre to watch the end of Toumani’s set:

Yet again, he and his band were incredible. Watch this space for a sneaky video of his encore, as soon as I’m somewhere with decent internet access!

After another night in a Travelodge (we went for the super-budget option of all sleeping in one room), Kath, Ellie and Stephen got in the van and headed to Edinburgh with my harp but without me. I trekked off to Liverpool to spend three days at the NCRI Cancer Conference with my work hat on, but felt absolutely gutted not to be going with them. Meh.

I’m blogging from the conference and producing audio and video coverage on behalf of Cancer Research UK and the NCRI.  Although it’s nowhere nearly as much fun as being on tour, our Science Update blog has been nominated for a Pfizer Excellence in Oncology award so I’m looking forward to the awards ceremony on Tuesday night. Fingers crossed! 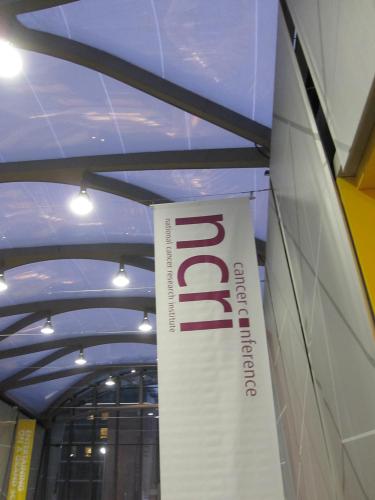 I'm now at the NCRI Cancer Conference. It's nowhere as cool as being on tour

This entry was posted in Gigs, Music, Revere, Travelling around. Bookmark the permalink.

This site uses Akismet to reduce spam. Learn how your comment data is processed.